Home » GENERA D-F » Erica » Erica mammosa flowers
Back to Category Overview
Total images in all categories: 10,169
Total number of hits on all images: 4,831,437 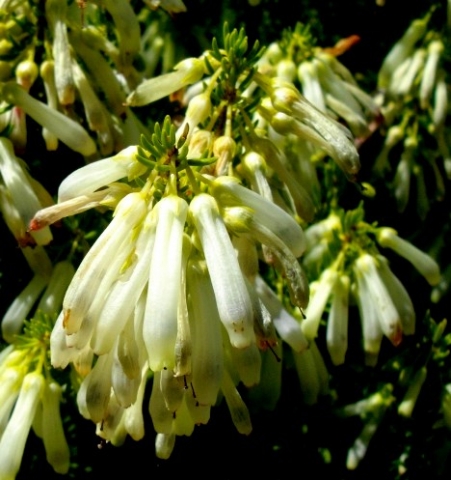 Erica mammosa bearing white flowers with cream tips is but one of the presentations the species is capable of. This cream-flowered form found on few Cape Peninsula mountain slopes used to be called E. gilva.

The drooping flowers are borne in tight or loose racemes. The sepals are from 3,5 mm to 6 mm long, obovate or ovate-lanceolate in shape with acute keel-tips. The sepals are cream-coloured in the photo, just long enough to fold over the back end of the corolla.

The hairless corolla tube has four characteristic dents or furrows near its base. The corolla is obliquely inflated with erect, rounded lobes at their constricted openings. Corollas become from 1,5 cm to 2,5 cm long. The stamens are hidden inside the corolla, the style is shortly exserted, dark in the photo.

Mammosa means with breasts, referring to the tube-shape of the corollas resembling cow teats (Baker and Oliver, 1967; Manning, 2009; Andrew, 2012; www.plantzafrica.com).