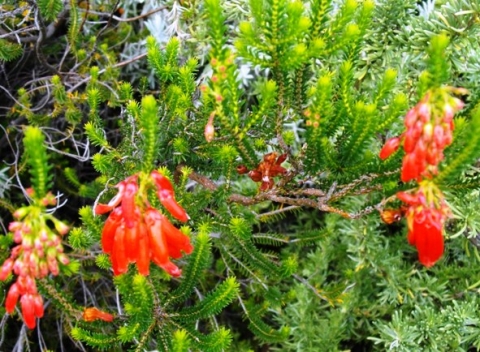 Erica mammosa, the ninepin heath or rooiklossieheide in Afrikaans, is one of the Erica species with much flower colour variation. Dark red or orange red flowers in small inflorescences is the common form of this plant. Other forms recorded include orange, pink, purple-pink, green, cream, white or white with pink tipped flowers.

The erect shrubs are usually much branched, growing to heights over 1 m. The stems are covered in tiny soft hairs (puberulous) and whorls of hairless, needle-like leaves.

The species distribution is in the Western Cape from Clanwilliam and Ceres to Stellenbosch and Bredasdorp. The habitat includes both sandy flats and higher mountain slopes in fynbos. The species is not considered to be threatened in its habitat early in the twenty first century.

The photo was taken in the Harold Porter National Botanical Garden during October (Baker and Oliver, 1967; Manning, 2009; www.plantzafrica.com).