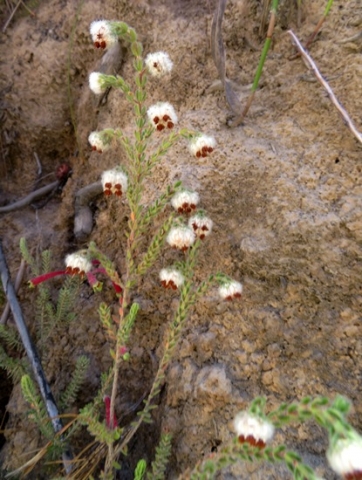 Erica lanata, commonly known as wool heath, is an erect shrublet in the Eriodesma section of the Erica genus. The plants reach heights from 30 cm to 60 cm.

The species distribution is in the east of the Western Cape and the west of the Eastern Cape, from around George or slightly more westerly to Humansdorp. The photo was taken on a mountain slope near the farm Spookberg in the Langkloof.

The habitat is montane, moist fynbos in fairly high rainfall terrain. The species is not considered to be threatened in its habitat early in the twenty first century (Moriarty, 1997; Bond and Goldblatt, 1984; iNaturalist; JSTOR; http://redlist.sanbi.org).