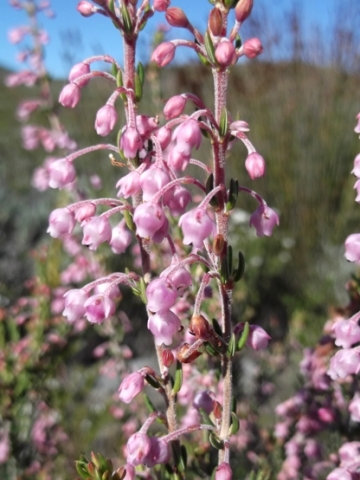 Where these plants flourish, the striking sight of their prolific blooming will impress; in the past too often inviting excessive flower harvesting. The flowers nod from leaf axils, emerging at the nodes in groups of different size in an erect inflorescence resembling a raceme.

The species distribution is from Stanford to Gansbaai, the plant a Western Cape endemic. The habitat is Agulhas limestone fynbos and Overberg dune strandveld where the sandy soils are alkaline to neutral.

Heavy harvesting for flower export, invasion by Acacia cyclops in the habitat and too frequent fires have rendered this species endangered; harvesting of it is now prohibited. A large part of the remaining population is protected in the Grootbos Private Nature Reserve (Baker and Oliver, 1967; Privett and Lutzeyer, 2010; Mustart, et al, 1997; iSpot; www.redlist.sanbi.org).