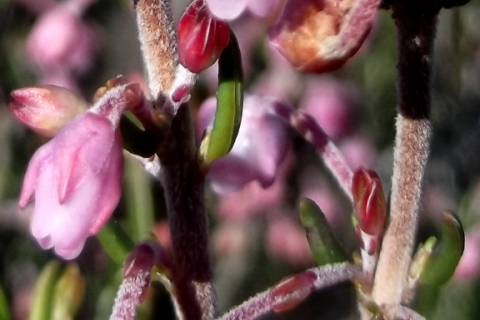 The flower pedicels (stalks) and straight, slender upper stems of Erica irregularis are covered in soft, whitish, stubbly to downy hairs. Lower down the older stems are glabrous (hairless). There usually is a pair of bract-like green leaves at the base of the pedicel.

The dark red, fleshy bodies seen upon the pedicels are leaf-like bracts, usually growing in pairs near the middle of the pedicel; the lower ones near the base mostly dry. A pale corolla in picture is half-concealed under the pointed sepals of 3 mm long that reach about two thirds up the corolla length.

A variable number of flowers grow from each of the successive groups of leaf axils up the stems. This flower number variability probably gave rise to the specific name of irregularis. This name is derived from the Latin ir- meaning contrary, regula meaning a straight edge or strip and -aris meaning resembling (Baker and Oliver, 1967; Privett and Lutzeyer, 2010; Mustart, et al, 1997; iSpot; Andrew, 2017).