Home » GENERA D-F » Erica » Erica irregularis flowers
Back to Category Overview
Total images in all categories: 11,018
Total number of hits on all images: 5,656,278 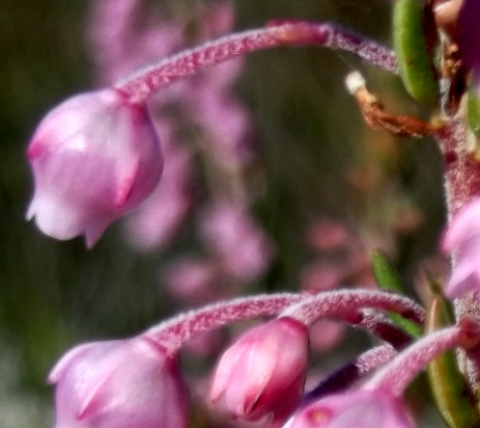 The Erica irregularis flowers grow in small clusters from leaf axils, mostly on small side-branchlets. Their 5 mm long, slender pedicels leave most of them pendulous.

Flower colour is several shades of pink, the shape more or less globular. The flower-coloured, lanceolate to oblong sepals clutch the lower part of the corolla. The keeled tips of the pointed sepals have the darkest colouring on the flowers in picture.

The corolla is about 4 mm long, variably constricted at the mouth. The obtuse corolla lobes are short, rounded and erect, not spreading. The brown, oblong to wedge-shaped anthers are included in the corollas, as is the style and the head-like stigma.

The ovary, shaped like an inverted green cone, is positioned on a large disc inside the corolla (Baker and Oliver, 1967; Privett and Lutzeyer, 2010; Mustart, et al, 1997; iSpot).