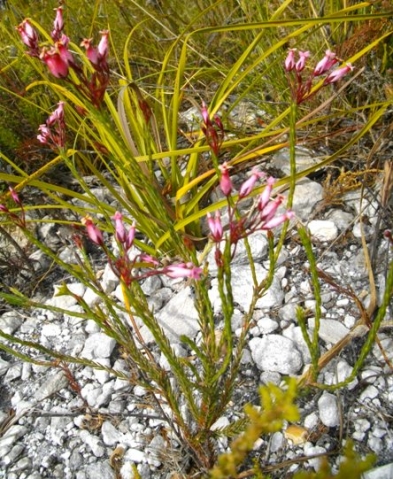 Erica irbyana has one to eight stalked flowers emanating from the same point at a stem tip (umbellate). The flower is pink and flask-shaped with a tapering neck and spreading, star-shaped lobes at the mouth. The corolla is sticky. The anthers do not protrude above the flower mouth that is darker than the rest of the corolla. The red, pointed sepals contrast against the pink bases of corollas in this photo. It was taken of a Fernkloof plant in December. Flowering commences in spring and continues to midsummer.

The plant grows branched, wiry stems to 45 cm. The narrow, hairless leaves are positioned in groups of three. They may be spreading or pressed against the stems; in this case the latter. Leaf apices end abruptly with tiny central tips protruding as continuations of the midribs.

E. irbyana flowers show some variability. The species resembles E. shannonea, almost like a smaller version of it.

The plant is found in the Caledon, Hermanus and Bredasdorp region. Its flowers are darker in the eastern part of the distribution area (Baker and Oliver, 1967; Bean and Johns, 2005).