Home » GENERA E-F » Erica » Erica diaphana flowers
Back to Category Overview
Total images in all categories: 12,081
Total number of hits on all images: 7,379,131 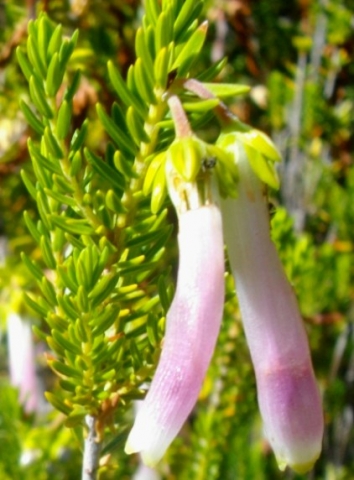 The flowers of Erica diaphana grow solitary or in groups of up to three from the stem tips. Their longish stalks allow them to nod. Short, green and leaf-like sepals at the back of the corolla tubes resemble the bracts positioned immediately behind them.

The translucent corolla tubes become up to 2,4 cm long. These very sticky and shiny tubes are pale pink to purplish in colour, their short lobe tips rounded and not spreading much, in the photo not at all. These lobes vary in colour between pale green or lemon yellow to white.

There is a Latin word (diaphanus) and an older Greek one (diaphanes) preceding the English one, diaphanous, meaning translucent, delicate or light, these days pertaining mainly to a fabric. Dia in ancient Greek meant through and phanein meant to show, yielding an apt specific epithet for the plant.

Neither stamen nor style is exserted from the flowers in picture. The anthers appear dark, positioned inside the tube some distance behind the mouth, while the stigma usually becomes exserted in older flowers. Flowering occurs in summer to early autumn. The photo was taken in March.

Pollination is done by birds, particularly sunbirds that have long beaks for reaching the base of the tube where the nectar awaits. Some insects like wasps and bees also feed here by biting through the corolla tube at its base to reach the nectar. Thus they (mostly) do not touch stigma or anther.

This leaves the pollination contract between the parties unbalanced as food is provided without the normal quid pro quo of depositing pollen upon stigmas. If plants had a legal system, such practices might have been regarded as prima facie cases of breaking, entering and theft or robbery.

They don’t; thousands of plant species having cohabited effectively with all the kinds of extant and extinct animal and insect species on earth for about two billion years before the arrival of humanity. Humans do need laws for plant protection, however, as their offences against nature since the industrial revolution, a mere 200 years or so ago, has already caused havoc in plant species survival everywhere on earth (www.plantzafrica.com; Baker and Oliver, 1967; Wikipedia).