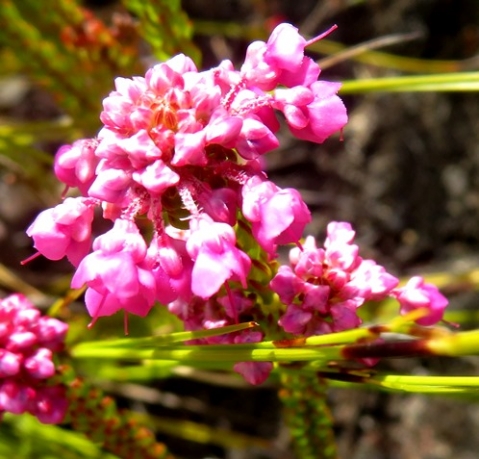 The flowers of Erica cubica var. cubica nod in dense umbels at stem-tips on reddish peduncles of 4 mm to 8 mm long. A peduncle has woolly hair clusters and two narrow bracts. The four sepals may be either narrowly lance-shaped and keeled, or rounded as in the photo. They overlap for nearly half to three quarters upon the petals, sometimes with a prolonged keel, resting on the petals.

The four round-tipped petals open widely in the part beyond the sepal tips, the corolla somewhat cone-shaped, from 3 mm to 6,5 mm long. It is coloured as the sepals or darker pink to reddish.

The filaments are broad and tapering, the anthers concealed inside the mouth. The style is exserted above the top-shaped ovary. Flowering happens mainly from late winter to midautumn. The photo was taken in January.

The specific name, cubica, is derived from the Greek word kubos meaning a cube, referring to the box-like lower part of the flower inside the calyx (Baker and Oliver, 1967; Pooley, 1998; Moriarty, 1997; Bond and Goldblatt, 1984; iNaturalist).