Home » GENERA E-F » Erica » Erica cerinthoides, a hairy story
Back to Category Overview
Total images in all categories: 12,082
Total number of hits on all images: 7,379,589 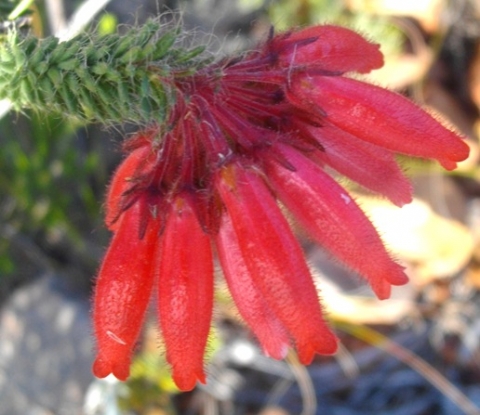 Hairy appearance takes a couple of forms on this flowering stem-tip of Erica cerinthoides. The dense green leaves, more or less imbricately ascending up the stem have long, wavy white hairs, especially at the leaf tips. Such hairs are sometimes referred to as being pilose when straight, villous when curved. There seem to be shorter hairs elsewhere on the bluish green leaf surfaces. Long white hairs are also found on the small bracts low on the purple, hairy peduncles of the flowers, as well as on the purple sepals.

On the flowers darker stubbly hairs are scattered sparsely along the corolla surfaces. Such hairs are sometimes referred to as being hispid. The shape, size, density and texture of plant hairs are differentiated by adjectival terms developed for descriptive precision. There are sometimes glandular hairs on the flower tubes of this species. Glandular hairs, like ordinary hairs, are called trichomes, a term denoting variable plant appendages that also includes scales and papillae. Glandular trichomes consist of hairy stalks supporting heads in which some substance of value to the plant is secreted in liquid form.

This flower was seen on the Rooiberg south of Calitzdorp during October (Baker and Oliver, 1967; Wikipedia).