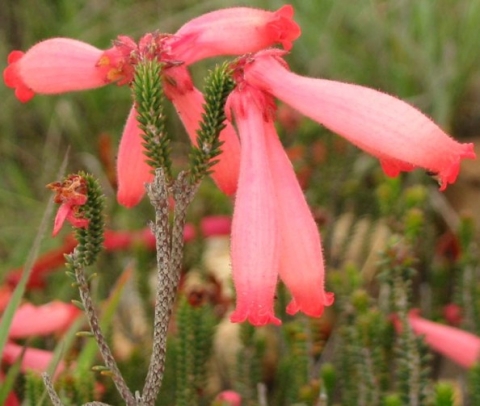 These Erica cerinthoides flowers have pale rose corolla tubes that are narrow near the base before their slightly asymmetric bulges near the tips. At the flower mouth the colour deepens  to crimson that continues onto the short, obtuse, outwardly curving corolla lobes. E. cerinthoides corolla lobes may also be positioned erectly, pointing forward. The sepals of this specimen are crimson as well, dark central lines running to their acutely pointed tips. Small dark bracts, narrowly pointed, adhere to the backs of the sepals.

The small, ascending leaves are narrowly pointed and mostly dark green. They are arranged in vertical arrays up the stems. Older leaves have dropped off, leaving gnarled whitish patches along the purplish brown stems.

The specific name, cerinthoides, reminds of the similarity between the umbellate flower clusters of this Erica and those of flowering plants in the Cerinthe genus that produce small clusters of drooping, tubular flowers.

This plant is believed to represent one of the several forms of E. cerinthoides occurring in the northeast of South Africa (Wikipedia; Baker and Oliver, 1967; www.plantzafrica.com).