Home » GENERA E-F » Erica » Erica cerinthoides
Back to Category Overview
Total images in all categories: 12,061
Total number of hits on all images: 7,359,880 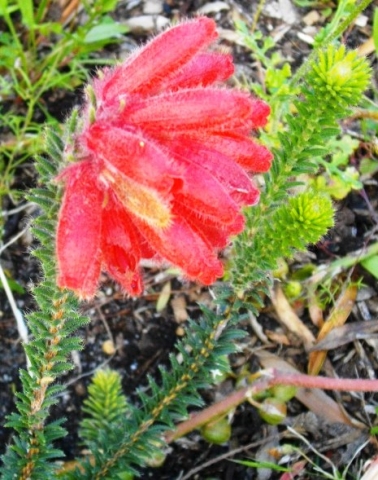 Erica cerinthoides is widely described as the most well-known member of South African ericas. Since there are over 860 Erica species in southern Africa alone and 660 in the fynbos, E. cerinthoides is a very prominent representative of these popular flowers.

Unlike most ericas it resprouts after fire from the persistent rootstock. This enhances flower and thus seed production, making the common name of fire heath a deserved one. If it does not burn it becomes woody and tall. The Afrikaans name of klipheide (stone heath) may relate to its often rocky montane habitat.

Why would this one be so well known? It has the widest distribution of all the South African Erica species and shows much variation in response to the challenges posed by the variable growing conditions: It is found from the Cederberg in the Western Cape winter rainfall area, where the plants grow from nearly sea level to mountain top. It is also found in the southern Cape where heights of 1,5 m are attained. also widespread in summer rainfall areas such as the Eastern Cape, the KwaZulu-Natal mountains, Lesotho, Swaziland, Mpumalanga and the Soutpansberg in Limpopo, where a white flowering form occurs.

The species is not considered to be threatened in its habitat early in the twenty first century (Baker and Oliver, 1967; Manning, 2007; www.redlist.sanbi.org).