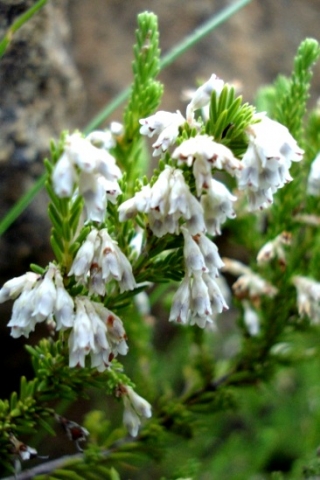 This Erica caffrorum var. caffrorum plant was photographed in January near Qacha’s Nek, on the South African side of the Lesotho border.

The slight tapering of the leaves at their tips may be noted and the pale leaf midribs, matching the cream coloured upper branches are in evidence. The corollas on this plant are white, the calyces slightly cream, although just so slightly deviating from being white as well. The calyx lobes are acutely pointed, clasping the corolla about halfway up its length.

The flowers that appear younger than those in other photos of the species shown here are curiously more nodding or pendulous than the older ones on flowers already turning brown.