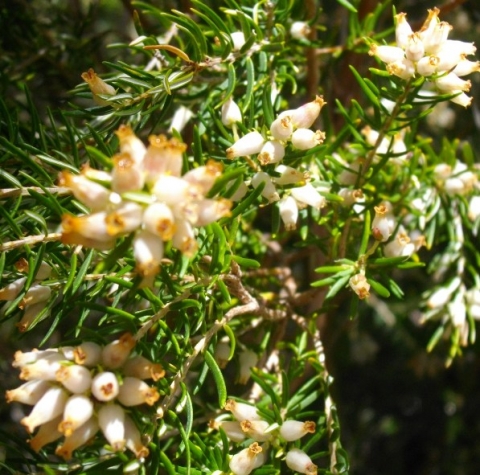 Erica caffra, the water heath, is one of the few ericas that may grow into a small tree, listed as such in the South African Tree List (No. 572). The plant is characterized by the strong sweet scent it exudes when blooming (in winter, spring and into summer).

The species distribution is remarkable: fynbos down to the coast (where 660 of the 860 Erica species are found), as well as on the summer rainfall east coast of South Africa in the Eastern Cape and KwaZulu-Natal. It grows along water courses in those provinces, but also inland to altitudes of about 1800 m in Lesotho and Free State grassland.

The bark is dullish grey, becoming fissured on old stems. New branches are many on thriving plants and slender. The leaves are small, grow in whorls of three, are dark green, ericoid, i.e. narrow to needle-like with edges rolled under. The flowers are medium-sized for Erica, conical or urn-shaped, white or creamy in colour. They last long on the plant and turn a rusty brown with age, as can be seen on the corolla lobes in picture.

This photo was taken during October in the Harold Porter National Botanical Garden where some specimens are about 5 m tall (Coates Palgrave, 2002; Baker and Oliver, 1967; Manning, 2007; www.plantzafrica.com).