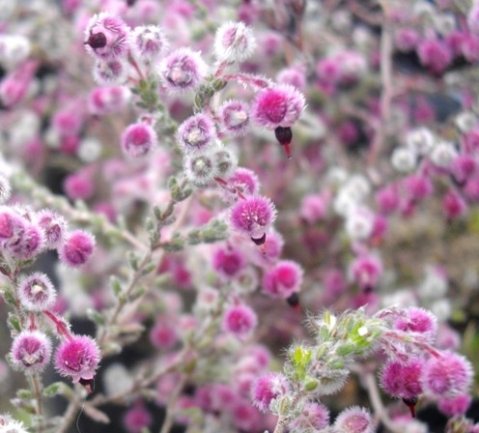 The distribution of the kapokkie or Erica bruniades, lies in the Western Cape, from the Cape Peninsula to the Gifberg in the north and Bredasdorp in the southeast. The shrublets grow in moist peaty places or on sandy flats and lower slopes. Large stands may occur in the fynbos.

Pale, rounded corolla lobes, in contrast to the calyx hairiness, are visible in picture on some of the flowers, above the anthers.

The size and colour of the flowers vary with the habitat over the plant’s distribution area. E. bruniades bears a resemblance to a species of the Hermanus area, viz. E. villosa, but the sepals are broader and the hairs are finer and denser (Baker and Oliver, 1967; Manning, 2007).