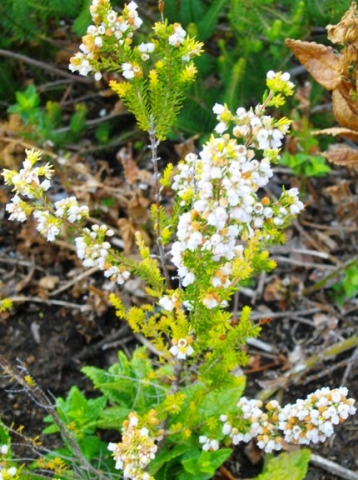 Erica bolusiae is close to becoming one of the victims of human progress. Its habitat in areas of the Cape Flats has been largely occupied by urban development. In 1997 it was already listed as a threatened plant, but may be close to being extinct in the wild.

E. bolusiae grows at Kirstenbosch, however, where this specimen was photographed in March. The plant is a dwarf shrub growing to about 40 cm. The attractive white flowers are clusters of small open-mouthed cups with the inner flower parts a little hidden inside the base of the corolla. The four shallow lobes at the top of the corolla are sometimes tinged with pink. There may be tiny white hairs visible on the outer surface of the corolla. The leaves are narrow, typically ericoid and distributed in whorls evenly spaced along the stems. Some leaves also envelop the base of the flower (http://plants.newplants.co.za; Wikipedia).