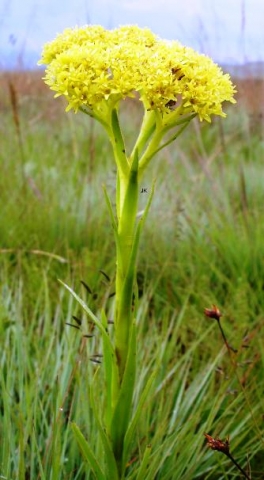 Crassula vaginata is an erect, little-branched and robust succulent with a variety of flower colour possibilities. Flowers appear in January to April as a flat-topped thyrse. They are yellow as in the picture, but may also be cream, white, red or pink. Stem leaves grade down in size to the top. They are linear to lanceolate in shape and hairy or smooth, but with club-shaped hair fringes along the margins.

This plant is thought to be Crassula vaginata subsp. vaginata. The List of Southern African Succulent Plants lists it.

Diverse forms of a species in a large distribution representing varied climate, soil, elevation and other conditions may be expected. That is the case for this plant that grows throughout tropical Africa and parts of North Africa and Arabia. White, cream and yellow flowering forms are known in South Africa where it grows in the Eastern Province, KwaZulu-Natal, Mpumalanga and Limpopo (Germishuizen, 1982; Manning, 2009; JSTOR; iSpot; Smith, et al, 1997; www.zimbabweflora.co.zw).