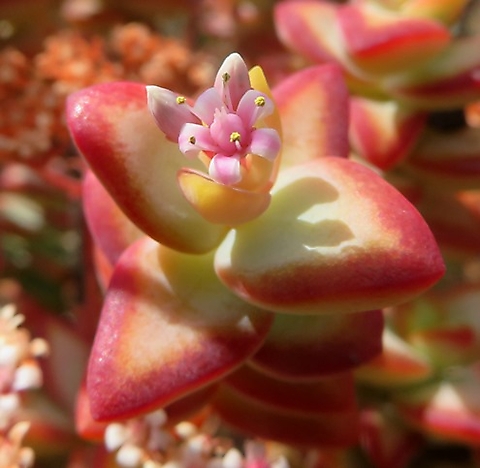 Crassula is a somewhat diverse genus of shrubs ranging from small annuals to perennial undershrubs or shrublets to small treelets. Some are monocarpic, i.e. they die after flowering once. Most crassulas have soft woody or cartilaginous stems, while a few grow tubers.

Crassula natans is tiny, floating on water or waiting in hollows that are seasonally dry, while others like C. arborescens and C. ovata grow more than a metre high and last for many years.

The Crassulaceae family comprises succulents and other plant types, including aquatics worldwide. Only five genera consisting of succulents are indigenous in South Africa.

The opposite, simple Crassula leaves are joined in pairs at the base. They are fleshy, membranous or thickly succulent, persistent or deciduous, sometimes clustered in stem-tip rosettes.

The flowers grow solitary or numerous in simple or branched clusters, mostly thyrse-shaped. Distinct peduncles may be present, while there may be bracts below the flowers, usually shorter than the leaves.

Floral parts usually occur in fives: the small calyx five-lobed and persistent. The mostly five petals are erect or spreading, fused at the base in a small cup- or urn-shaped tube. The flowers are usually white or pink, occasionally yellow. The again mostly five stamens emerge from below the superior ovary that consists of as many carpels as there are calyx lobes, usually five.

The top of each carpel narrows into the style and a single, tiny stigma. Some stigmas are sessile or positioned laterally. The seeds are ellipsoid, smooth or covered in tubercles that are often in rows.

The more than 300 species occur mainly in southern Africa, but there are some in the rest of Africa, Europe, America and some islands. The majority of species occur in semi-arid, winter rainfall areas, more than 100 of them in the fynbos region.

Several crassulas are popular in horticulture, often easy to grow. The plants are rarely browsed, unpalatable to game, stock and even insects, but not toxic.