Home » GENERA B-C » Crassula » Crassula rubricaulis painted by sunlight
Back to Category Overview
Total images in all categories: 8,940
Total number of hits on all images: 3,959,665 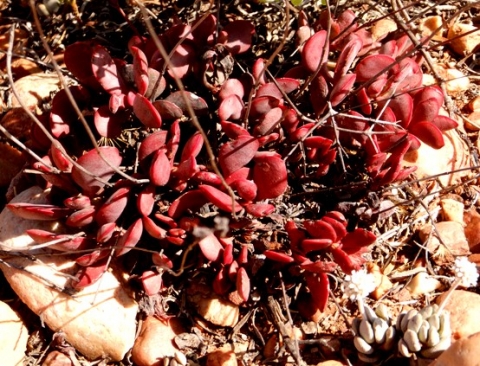 If summer has been hot and dry, Crassula rubricaulis leaves may become as red as seen on this plant growing in the Oudtshoorn district. Exposed among stones, it must have been something to see when flowering (white) on the many tall stalks a while ago.

The paddle-shaped leaves are still thickly succulent and borne erectly, maybe favouring morning and afternoon sun above the maximal blaze at noon. The branches are still short although the spread indicates an older plant. Succulents often behave quite differently in cultivation, this one for instance reaching heights near 50 cm when flourishing. Many also die from too much water or watered in the wrong season.

Often found on mountain slopes, C. rubricaulis is not considered to be threatened in its habitat early in the twenty first century (www.plantsinstock.co.za; www.redlist.sanbi.org).