Home » GENERA B-C » Crassula » Crassula pyramidalis
Back to Category Overview
Total images in all categories: 8,946
Total number of hits on all images: 3,962,521 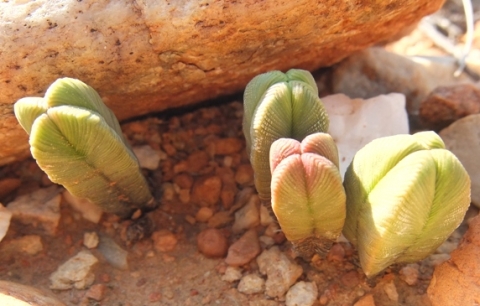 Crassula pyramidalis, in Afrikaans commonly known as the rygbossie (little threading or tacking bush), is a brittle shrublet that branches and typically grows to 10 cm, occasionally 25 cm. Whether some of the stems seen in the photo are produced from the same root base is not known.

The about triangular leaves are unusual: scale-like and symmetrically stacked densely in four vertical arrays in a cuddling mode, they withhold sun from the leaf surfaces, exposing only the entire leaf margins. Maybe considerations of dehydration in their semi-arid habitat outweighs the need for more photosynthesis?

The species distribution ranges from the Bokkeveld Mountains and the Succulent Karoo in the west across the Little and Great Karoo to the Eastern Province. The habitat includes coastal plains and slopes in quartzitic sandstone soils. These plants occur in both winter and summer rainfall regions (Vlok and Schutte-Vlok, 2010; Shearing and Van Heerden, 2008; Moriarty, 1997).