Home » GENERA B-C » Crassula » Crassula perforata
Back to Category Overview
Total images in all categories: 9,121
Total number of hits on all images: 4,075,190 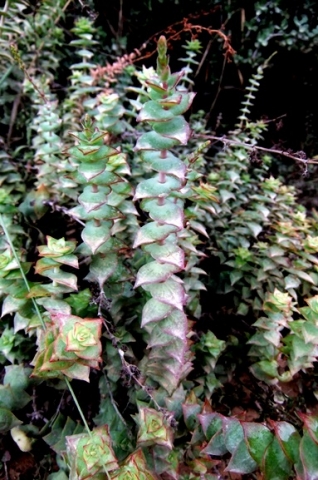 These Crassula perforata stems are starting inflorescences from their tips at the end of August. Unaided by shrub support, the stems manage an erect stance that may be lost later as mass is added and aid from surrounding plants is not forthcoming. Sometimes exceeding 1 m in length, the stems seldom branch apart from at the base.

The species distribution is from Riviersonderend in the Western Cape through the eastern Cape to KwaZulu-Natal. The plants are often seen in rocky scrub and dry cliff faces, growing in several ecological settings including succulent Karoo, fynbos, Nama Karoo and here in Albany thicket.

Neither of the two subspecies of C. perforata is considered to be threatened in its environment early in the twenty first century (Smith and Crouch, 2009; http://redlist.sanbi.org).