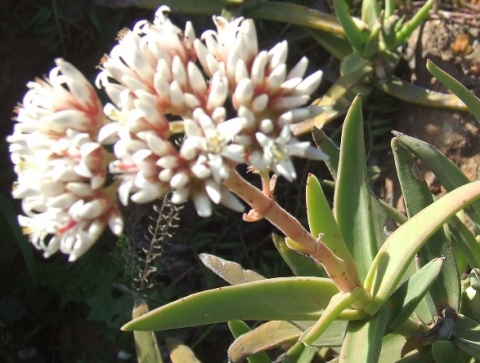 This variety of Crassula perfoliata has long, pointed, grey-green leaves, clustered near the stem tips. Stems become a greyish brown. Small, opposite leaves are widely spaced along them. Heights of 40 cm are reached.

The white, tubular flowers have five petals that curve backwards at their tips. The styles are bright red, the calyces hairy, also red. A flower becomes about 7 mm long. Flowering happens from mid-autumn to early spring.

The variety is widely distributed from the eastern Eastern Cape, along the KwaZulu-Natal coast northwards into the Mpumalanga and Limpopo Lowveld. It is also found in Swaziland and further into tropical East Africa. In the veld one finds the plant on rocky grassland slopes and granite ledges, or along cliffs by river banks.

There is another white-flowering variety of C. perfoliata that grows in the southern Cape, viz. C. perfoliata var. perfoliata. It becomes tall, nearly 1 m in height and sparsely branched. The plant carries its boat-shaped, blue-green leaves angled up. Dense clusters of small, bell-shaped flowers appear in spring to midsummer (Smith and Crouch, 2009; Onderstall, 1984; www.plantzafrica.com).