Home » GENERA B-C » Crassula » Crassula ovata
Back to Category Overview
Total images in all categories: 9,765
Total number of hits on all images: 4,385,479 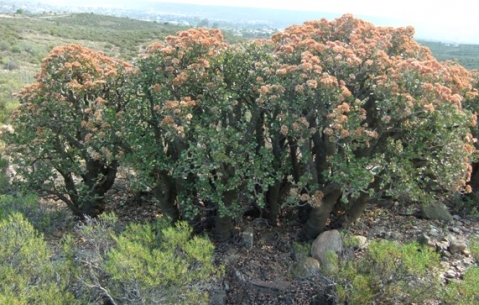 Crassula ovata is one of the larger members of the Crassula genus in southern Africa; about half of the 300 species are found here. The plant may reach 1,5 m in height. A rounded crown of succulent leaves at the stem tips gives the plant a miniature tree-like appearance. The stout, erect trunk branches much near the top, likening the plant to a bonsai baobab.

This must be South Africa’s most commonly planted Crassula, both locally and worldwide. It has been used in horticulture for so long that several popular cultivars have come about.

The dense, isolated stand seen here on the outskirts of the town of Oudtshoorn grows slightly to the west of the plant’s reported natural distribution. This robust grower is but one plant species that may well take root if a piece is left lying on the ground. The distribution of the species ranges from around De Rust (not far from Oudtshoorn) to the Eastern Cape. Some parts of KwaZulu-Natal also have them, as well as parts of Mpumalanga.

These specimens may well be escapes from a local garden, probably arriving among garden refuse discarded over the fence into the veld long ago; the habit of beautifying a garden while messing up the countryside around the town is unspeakable, requiring strong censure.

The habitat of this plant is clay and sandy soils on rocky outcrops and slopes, often associated with spekboom, Portulacaria afra (Vlok and Schutte-Vlok, 2010; Smith and Crouch, 2009; iSpot; www.plantzafrica.com).