Home » GENERA B-C » Crassula » Crassula intermedia
Back to Category Overview
Total images in all categories: 9,579
Total number of hits on all images: 4,307,121 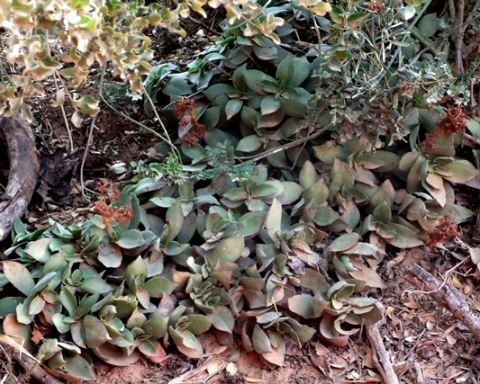 This stand of Crassula intermedia in the Addo Elephant National Park sees some sun at ground level among tall shrubs.

The short stems branch frequently, forming many rosettes of decussate leaf pairs. Sometimes broad, rounded and tightly compact, in this case the leaves are pointed, obovate or elliptic and loosely ascending. The pale green and fleshy blades curve slightly in various ways, sometimes concave as the margins turn up slightly or the tips arch down. The margins are faintly ciliate, fringed with tiny hairs.

The species distribution is in the Eastern Cape from the Suurberg to Kenton on Sea and northwards to Peddie. Its habitat is narrow, shady kloofs where it grows in sheltered spots near south-facing cliffs, thicket or forest. The species is not considered to be threatened in its habitat early in the twenty first century (Gledhill, 1981; iSpot; http://redlist.sanbi.org).