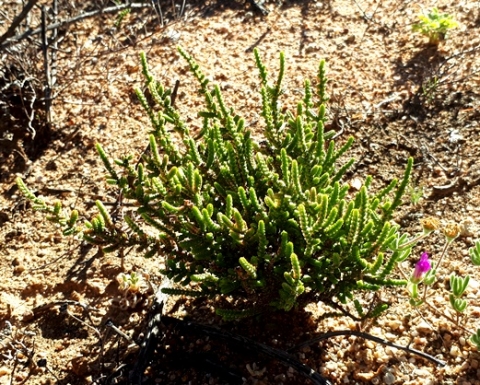 Crassula muscosa var. obtusifolia is a rounded, much branched to tufted shrublet that reaches 15 cm in height. The branches are brittle, the old ones becoming slightly woody.

The variety was previously known as C. muscosa var. rigida, one of four recognised varieties of C. muscosa that do not differ greatly.

The distribution of this variety is limited to the west of South Africa, particularly the Northern Cape, the north of the Western Cape south to about the Cederberg; maybe also southern Namibia. This plant was photographed in the Goegap Nature Reserve near Springbok.

The stability of populations of subspecific taxa of C. muscosa in habitat have not been assessed early in the twenty first century; the species overall deemed to be of no concern (iNaturalist; www.llifle.com; http://redlist.sanbi.org).