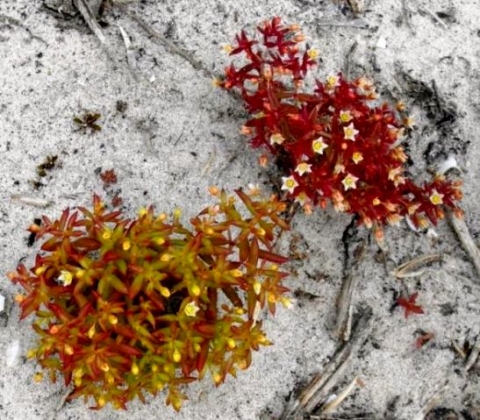 Crassula expansa subsp. filicaulis produces small white, yellow or pink flowers all year round, but more commonly from late winter to the end of summer. The flowers grow solitary on short stalks at branch tips. Flower size is up to 3 mm in diameter.

These were photographed close to the sea in September at the De Hoop Nature Reserve in the southern Cape. The distribution area is large, ranging from Namibia and Mozambique to the south coast of South Africa. Some regional variations should be expected in such a habitat range. Besides coastal sand, the plants grow in clay and loam soil, mainly in low lying areas (Vlok and Schutte-Vlok, 2010; Bond and Goldblatt, 1984; Mustart, et al, 1997; Privett and Lutzeyer, 2010).