Home » GENERA C » Crassula » Crassula deltoidea
Back to Category Overview
Total images in all categories: 10,853
Total number of hits on all images: 5,503,469 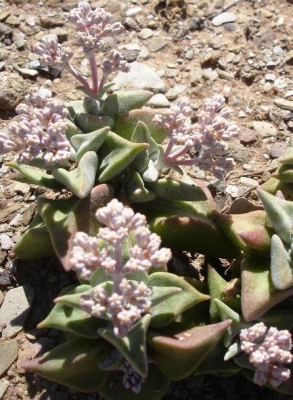 Crassula deltoidea is commonly known as silver beads. The early San indigenous population called it katakiso, while in Afrikaans it goes by the name gruisplakkie (gravel plaquette or small slab).

Flowering happens early in summer. The leaves of this plant are usually regarded as a bigger feature than the tiny flowers.

C. deltoidea is a low-growing Tankwa Karoo succulent of doringvygieveld (thorny mesemb land). The plant has become popular with gardeners, even internationally. It is a good choice for gardens in arid conditions where temperature extremes are common.

In habitat this plant will often be found sheltering under bigger, non-succulent shrubs. The species is not considered to be threatened in its habitat early in the twenty first century (Vlok and Schutte-Vlok, 2010; Smith and Crouch, 2009; www.redlist.sanbi.org).