Home » GENERA C » Crassula » Crassula campestris
Back to Category Overview
Total images in all categories: 11,923
Total number of hits on all images: 7,173,476 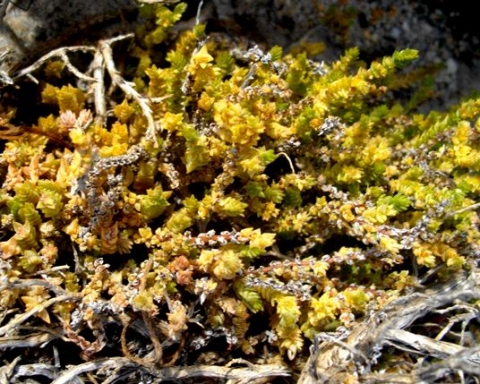 Crassula campestris is a low-growing, delicate annual reaching heights between 5 cm and 10 cm. The soft, leafy branches spread and ascend in a dense mass.

The species is distributed from the Cape Peninsula northwards to the Northern Cape, North West and the Free State, as well as eastwards coastally to Port Elizabeth. The plant is not a South African endemic as it also occurs in southern Namibia, possibly in Botswana. The photo was taken on Hoy Koppie during May.

The habitat is gravelly flats and sandstone slopes in fynbos, grassland, desert, succulent Karoo, Nama Karoo and scrub. The species is not considered to be threatened in its habitat early in the twenty first century (Privett and Lutzeyer, 2010; Bond and Goldblatt, 1984; iNaturalist; http://redlist.sanbi.org).