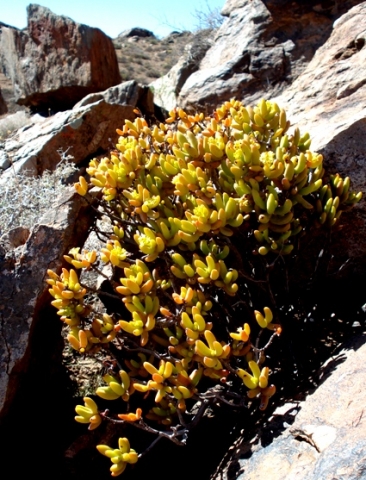 Crassula brevifolia subsp. brevifolia is found in Namibia and the western region of South Africa, through the Richtersveld and Namaqualand to the Gifberg and the arid, northern reaches of the Western Cape to Clanwilliam.

It grows on quartzite and granite outcrops and sandy slopes. These places have low human population numbers, farming activities do not interfere much with plant welfare. There is thus no threat to the survival of the species early in the twenty first century.

There is a second subspecies, viz. C. brevifolia subsp. psammophila, a rare plant, also occurring in the Richtersveld. Psammophila means sand-loving, referring to where the plants tend to grow (Bond and Goldblatt, 1984; iSpot; www.redlist.sanbi.org).