Home » GENERA C » Crassula » Crassula barbata, the baardrosie preparing
Back to Category Overview
Total images in all categories: 12,087
Total number of hits on all images: 7,392,846 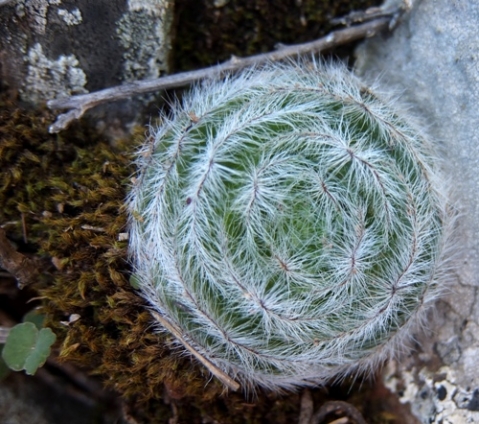 Like the swan supposedly singing once just before death, Crassula barbata only flowers once at the end of its lifetime. Such plants are called monocarpic, fruiting just the once, although each flower in the one-off inflorescence may produce a fruit.

After steady growth over one or two to several years, the big maturity moment arrives for the baardrosie (little bearded rose), as the plant is known in the (Afrikaans) vernacular.

The inflorescence, reaching 30 cm in height, produces spaced clusters of small tubular flowers along the slender, erect stem. Opposite bracts subtend each cluster (cymule) of flowers. Each flower is 5 mm in length. Its calyx is conspicuously green, comprising five ovate, hairless lobes.

The corolla of five narrow, nearly spoon-shaped petals attached to each other at the base, has tips that curl back pronouncedly, away from the corolla mouth. There is sometimes some red upon the corolla. Flowering happens in spring, sometimes already from late winter.

Photos of leaf rosettes like the one shown here are common. The wait for catching the plant in flower takes longer, making such photos rare (Vlok and Schutte-Vlok, 2010; JSTOR).