Home » GENERA C » Crassula » Crassula barbata
Back to Category Overview
Total images in all categories: 11,506
Total number of hits on all images: 6,488,462 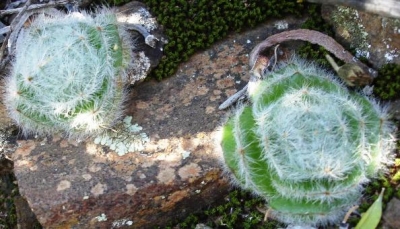 Crassula barbata, sometimes referred to as the baardrosie (little bearded rose), is a short-lived, dwarf leaf succulent producing an erect inflorescence up to 30 cm tall.

The long white hairs upon the upper leaf margins of the small green rosette make the species easy to identify. The rosettes growing at ground level reach a diameter of about 3 cm.

The plants grow naturally in the Tankwa Karoo and the Cederberg in the western extremes of the plant's distribution. It continues southwards to Worcester and eastwards to the Little Karoo as far as Oudtshoorn, as well as northwards to Victoria West in the Great Karoo. Subsp. barbata is found in the Western Cape, while subsp. broomii grows in the Northern Cape.

The habitat is gravelly slopes among rocks and outcrops in clayey soils. The plants are often found growing in the shade of whatever scattered shrubs may be present. Subsp. barbata is not considered to be threatened in its habitat early in the twenty first century, while the data concerning subsp. broomii is insufficient for judging its situation (Vlok and Schutte-Vlok, 2010; http://redlist.sanbi.org).