Home » GENERA C » Crassula » Crassula arborescens patrolling a ridge
Back to Category Overview
Total images in all categories: 12,081
Total number of hits on all images: 7,379,248 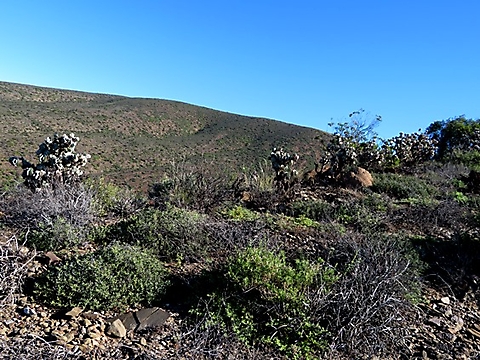 Succulents may dominate in size in the arid regions, not only hide as the small, resilient, survivor miracles under the bushes. Crassula arborescens here forms a conspicuous row on the crested ridge of a Little Karoo hillside as part of the tallest shrubs in the vegetation mix.

The big, succulent leaves appear incongruous among so many small-leaved plants, adapted for water retention in the semi-arid conditions. Such thick leaves have their own ways of retaining moisture, compared to thin blades. One feature is the erect or almost erect leaf positioning, which reduces the exposure to the sun.