Home » GENERA C » Crassula » Crassula arborescens
Back to Category Overview
Total images in all categories: 11,912
Total number of hits on all images: 7,163,175 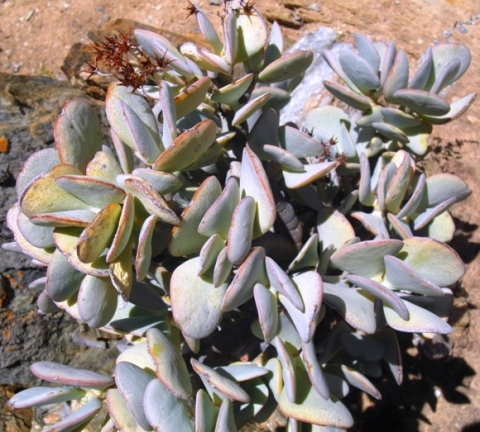 Crassula arborescens grows into a striking, tree-like shrub of bonsai proportions. It branches freely to assume its mini-tree shape.

The blue-grey disc-shaped leaves earned it the name of silver dollar plant. The leaves are covered in a waxy and powdery bloom that serves in a protective way against the sun. There is a notable pinkish mottling towards the upper ends of leaves, visible on close inspection. Leaves usually have entire margins that are marked by faint red lines. Leaf petioles are very short.

The trunk and lower big branches on a mature plant are thick and fleshy with smooth brown to greenish bark. The flowers borne in dense heads are almost white to pale pink in colour, star-shaped with five pointed petals.

Occasionally the plant may reach a height of 3 m and thus rightly be called tree-like as indicated by the arborescens name.

The distribution of C. arborescens subsp. arborescens, the common and well-known plant, is in the Western Cape from the Knersvlakte in the west to the Little Karoo. Subsp. undulatifolia grows only in the Eastern Cape in a restricted range in the Klein Winterhoek Mountains.

The habitat of subsp. arborescens is rocky outcrops in semi-arid conditions. It is of least concern early in the twenty first century, while subsp. undulatifolia growing in sheltered ravines of Albany thicket is critically rare, although its population is stable at the said time (Coates Palgrave, 2002; www.plantzafrica.com; http://redlist.sanbi.org).