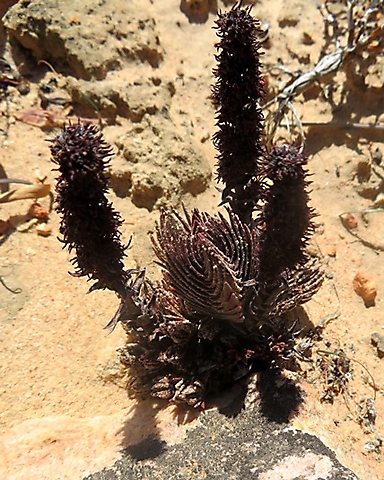 After flowering the Crassula alpestris subsp. massonii old branches are black with floral remains, by now fruiting. Several new, leafy branches have formed at the base for more flowering later, the leaves on the new growth compactly together.

The dead flower covering reaches from the stem-tips down to over half the length of the stems. The leaves on the lower parts of the old stems are spaced slightly more widely.

This subspecies has its flowers not all clustered at the stem-tip: smaller clusters also grow from all the upper leaf axils. The other subspecies, subsp. alpestris, only has flowers at its stem-tips (Frandsen, 2017; Manning and Goldblatt, 1997; iNaturalist).