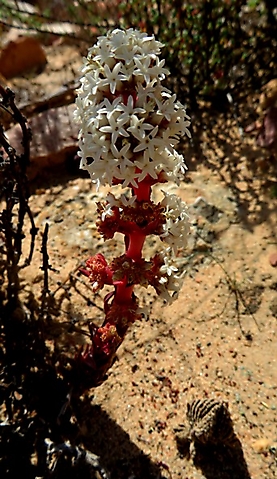 The leaves are slightly spaced lower down on the flower stems below the inflorescence. They can also be seen compactly together on the young plant in the sand next to the flowering one.

The triangular, decussate leaves form four arrays of leaves neatly stacked like book leaves, fused at their bases. The blade margins collect some blown sand from the surroundings, forming a protective covering. Maybe the small white cilia along the leaf margins also contribute to capturing grains of sand.

The subspecies distribution is small, restricted in the Western Cape to parts of the area between Clanwilliam and Laingsburg. The photo was taken in the Biedouw Valley during September.

The habitat is sandy and gravelly slopes and plateaus in succulent Karoo vegetation. The subspecies is considered rare but its population stable early in the twenty first century (Frandsen, 2017; Manning and Goldblatt, 1997; iNaturalist; http://redlist.sanbi.org).