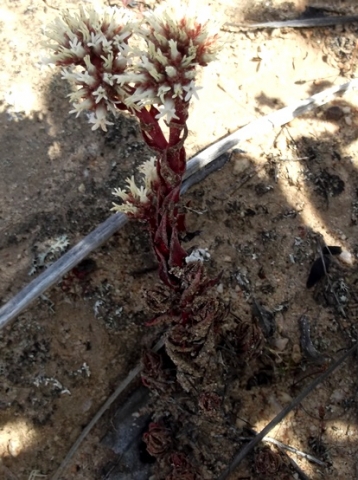 By October this Crassula alpestris subsp. alpestris plant growing in sandy soil in the Gifberg had nearly completed its blooming for the year, the leaves clearly exhausted from the effort. The compact umbel has a few of its lowermost flowers still offering something to passing insects.

Sand is attached to the shrivelling leaves, typical of this plant. A few branches have formed near the base.

There is a second, rare subspecies of this Crassula, viz. subsp. massonii found in a few places between Clanwilliam and Laingsburg. Its flowers appear both terminally and from leaf axils (Frandsen, 2017; http://redlist.sanbi.org).