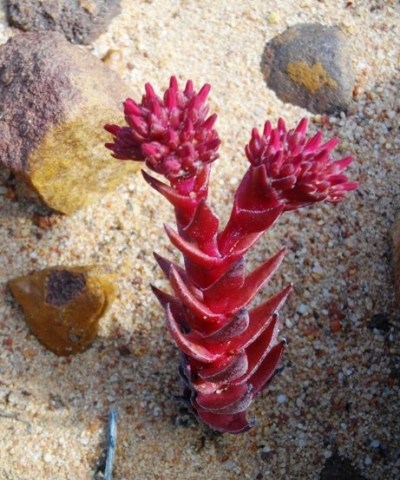 Crassula alpestris subsp. alpestris is a dwarf succulent that branches, forms clumps and occasionally reaches a height of 15 cm, although often only 5 cm. Adventitious roots are often grown from the branches into the sand to support the short taproot in feeding the structure in the trying conditions of its habitat.

The species distribution is near Nieuwoudtville, the Bokkeveld Mountains and west of the Tanqua Karoo, the Gifberg to near Worcester and the Rooiberg near Calitzdorp. The photo was taken at Kagga Kamma.

It grows in sandy soil of mountainous regions, often hidden away from suitable farming land; a fortunate survival choice. Summer temperatures of up to 50˚ C may occur in the exposed, shallow sandy patches among rocks where the plants do well. In winter there may be snow, inflicting cold to -5˚ C.

Add severe drought to the trials and tribulations offered by the habitat and some respect for the survivors of this land can be expected. This plant grows slowly in its harsh climate, reaching ages from 3 to 5 years; short compared to some other crassulas. The subspecies is not considered to be threatened in its habitat early in the twenty first century.