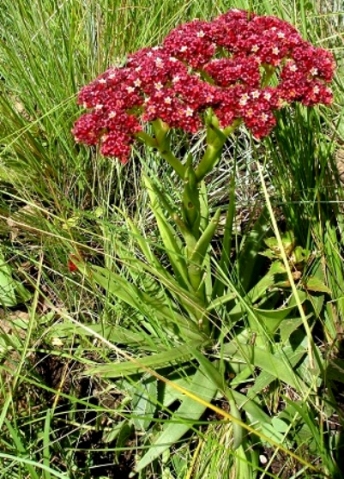 Crassula alba var. parvisepala is one of three recognised subspecies of C. alba. The plant may have densely scattered maroon spots on the leaves, but clearly not on this specimen that was photographed near Sabie in February. Photos of cultivated plants found on the Internet almost invariably show the red blotched leaves. The leaf is sessile, lance-shaped with entire margins that taper to an acute tip. While the basal rosette has the biggest leaves, those up the flower stalk are still substantial, but decrease on the way up.

The plant is found in grassland in the east of South Africa on high ground along the escarpment and the northern reaches of the Drakensberg. One earlier name, C. rubicunda var. lydenburgensis, indicates colour in the generic, location in the specific name.