Home » GENERA C » Crassula » Crassula alba var. alba with the usual red flowers
Back to Category Overview
Total images in all categories: 10,851
Total number of hits on all images: 5,501,429 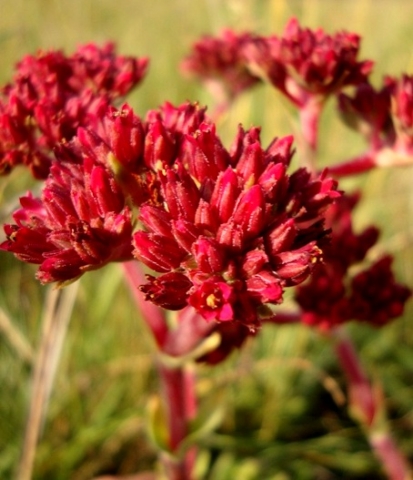 The colour of this Crassula alba var. alba inflorescence is more familiar to South African viewers than the Lowveld white ones also shown in this Album; quite ironic as the word alba suggests white flowers! The small flowers are closely clustered in the flat-topped corymb, or probably rather a thyrse. Among the flowers that are just opening, various stages of the process are in evidence. The inflorescence size varies, usually around 10 cm in diameter. Flowering happens from midsummer to autumn. This photo is from mid-February in grassland near Balfour (Germishuizen and Fabian, 1982; Van Wyk and Malan, 1997; iSpot).