Home » GENERA C » Crassula » Crassula alba var. alba with white flowers and red stems
Back to Category Overview
Total images in all categories: 11,769
Total number of hits on all images: 6,918,768 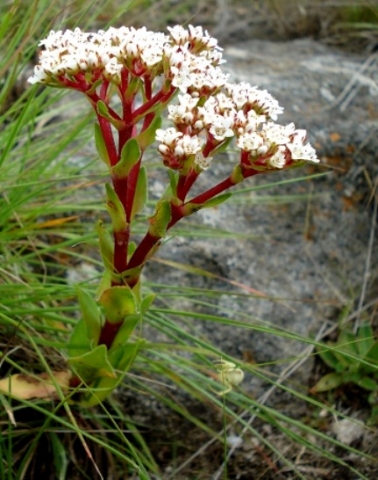 In this nearly flat-topped, corymb-like, white inflorescence of Crassula alba var. alba the sturdy purplish red branched stems are seen clearly with their covering of ascending, lance-shaped leaves and wavy margins. The leaves are well spaced here, opposite and decreasing in size on the way up. The leaf margin fringes of tiny short white hairs are just visible in the photo. This stem arises from a basal rosette of bigger leaves similarly shaped.

The usual colour of Crassula alba var. alba is white in Arabia and the north of Africa, south to at least Kenya. Further south the flower colour is pink, until it morphs to red in South Africa. But this generally believed convention is broken by these white flowering plants that have been found in colonies of hundreds of plants in grassland near Sabie in Mpumalanga (Germishuizen and Fabian, 1982; Blundell, 1987; Van Wyk and Malan, 1997; iSpot).