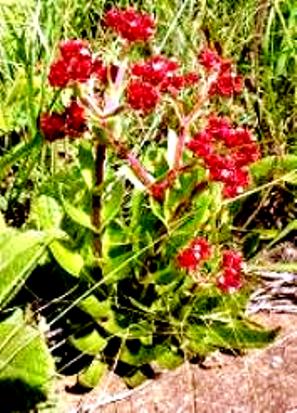 Crassula alba var. alba is a perennial succulent of summer rainfall grassland from the Eastern Cape to Limpopo and Swaziland. It grows in lightly shaded places on rocky slopes. Although widespread it isn’t common. The plant is short-lived, sometimes only biennial. It reaches a height of 50 cm.

The pale to yellow-green, narrow leaves are stalkless, lanceolate and hairy with ciliate margins, i.e. densely fringed with minute hairs. The leaves mainly form a basal rosette pointing obliquely upwards and outwards with acutely pointed tips. More leaves, positioned opposite each other and reducing in size are found upwards along the flowering stem. Reddish patches are sometimes seen on some of the leaves. The stems are pinkish red, erect and hairy; usually unbranched.

The inflorescence is a terminal, flat-topped thyrse made up of many small flowers appearing in late summer and autumn. The flowers may be white, pink or red as on this specimen; only occasionally living up to its name! The stamens have dark brown anthers (Germishuizen and Fabian, 1982; Van Wyk and Malan, 1997; Onderstall, 1984).