Home » TYPES » Climbers » Secamone alpini buds
Back to Category Overview
Total images in all categories: 11,506
Total number of hits on all images: 6,492,083 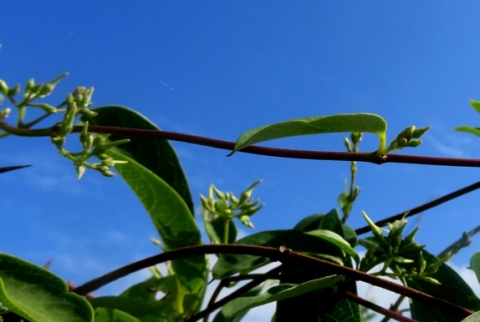 The flowers of Secamone alpini are small, growing in many-flowered, branched and pyramid-shaped inflorescences from leaf axils.

The flower has a five-pointed star-shape, creamy white with hairy corolla upper surfaces. The corolla lobes are 1 mm to 2 mm long and 1 mm wide, turning brown as they age. The flowers have a sweet or musty scent. They appear from late spring to mid-autumn.

In picture the stalked green buds have lengthened to thin, nearly conical tips, bulging at the base around the ovary.

Later, dark green fruit will appear, long and thin, in the form of cylindrical follicles grown in diverging, opposite pairs and tapering to acutely conical tips. The follicles become up to 8 cm long and 8 mm in diameter, brown when ripe. They split open when ripe, releasing the small seeds in the care of the wind. Dispersal is enhanced by a tuft of silky white hairs attached to each seed.