Home » TYPES » Climbers » Secamone alpini
Back to Category Overview
Total images in all categories: 10,362
Total number of hits on all images: 5,067,974 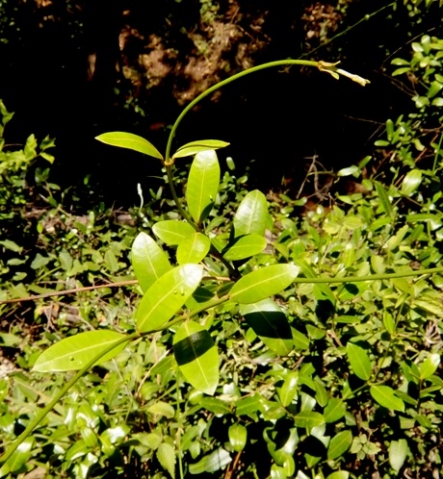 Secamone alpini, commonly known as monkey rope or in Afrikaans bobbejaantou (baboon rope), is a robust liana, a woody climbing plant that reaches the tops of tall trees, hanging from them and sometimes destroying their support plants by an abundance of foliage or strangling stems.

A member of the Apocynaceae family, injured plant parts exude a sticky, milky latex. The much-branched stems are pale brown, tough and woody. The upper stems are bright green and leafy.

The species distribution is large, from the southern Cape along the eastern parts of South Africa to tropical Africa, as far as Kenya. The habitat of this species is forest margin and thicket. The species is not considered to be threatened in its habitat early in the twenty first century (The Tree Society of Southern Africa, 1974; Gledhill, 1981; www.redlist.sanbi.org).