Home » TYPES » Climbers » Secamone alpini leaf pair
Back to Category Overview
Total images in all categories: 11,921
Total number of hits on all images: 7,168,617 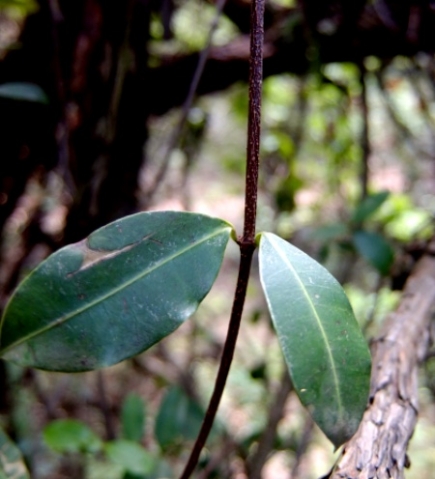 The upper stems of Secamone alpini may form tendril-like coils, covered in minute, rusty hairs. Not having found a support for twining yet, the stem-tip remains straight.

The leaves are opposite, the pairs spaced by long internodes. The short, sturdy leaf petioles are angled up against the stem, then bend back for the mature leaves to spread horizontally, forming a distinctive symmetrical shape.

The leaf-shape varies from oblong or elliptic to ovate or obovate (the widest part being nearer the tip than the base), sometimes lance-shaped. The leaf apex tapers, often attenuating in an elongated drip tip, the base tapering. Leaf margins are entire, rolled under.