Home » TYPES » Climbers » Sarcostemma viminale flowers
Back to Category Overview
Total images in all categories: 10,534
Total number of hits on all images: 5,183,651 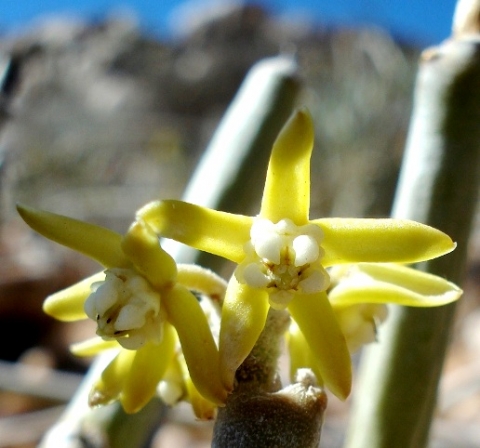 The small flowers of Sarcostemma viminale grow in creamy-white, spherical clusters or umbels at stem joints or nodes. Flower shape reminds of the Apocynaceae family to which the plant belongs. Five star-like, creamy yellow, oblong sepals at the back of the structure dominate the flower. They taper to acute tips and are spread open. The cog-shaped corolla is white and toothed, on top of which five prominent pointed lobes curve inwards. The tiny central corona also has five broad and short lobes. Flowering occurs mostly in summer and autumn.

The fruit is a pair of long cylindrical pods or follicles, resembling a pair of straight horns, although often pendulous. The follicles are initially green, becoming brown when they ripen and split open to release large quantities of seed. Each seed is furnished with a silky haired pappus, facilitating wind dispersal (Germishuizen and Fabian, 1982; Letty, 1962; www.repository.up.ac.za).