Home » TYPES » Climbers » Cynanchum viminale tackling a rock
Back to Category Overview
Total images in all categories: 11,411
Total number of hits on all images: 6,181,813 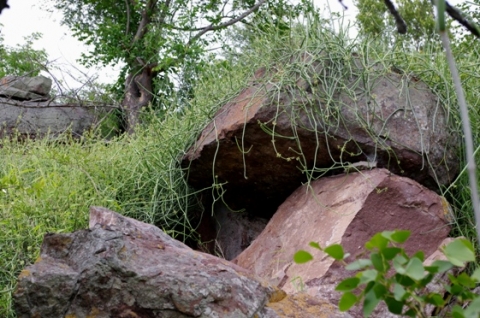 Cynanchum viminale, previously Sarcostemma viminale is commonly known as the caustic vine, grows widespread across the drier, hotter parts of South Africa. It is also found elsewhere in southern Africa as well as in the tropical regions of the Continent. An American name of Rapunzel plant has been encountered, suggesting transportation.

The common habitat is grassland and bushveld. A robust grower in a variety of climatic conditions and soil types, the plant has become a troublesome weed in some places within its natural habitat as well as where it has become introduced. It scrambles over and may strangle neighbouring vegetation.

The generic name, Cynanchon, is derived from the Greek name of the dogbane plant, Marsdenia erecta, which is or was kynanchon. This name is composed of the Greek words kuon or cyn meaning dog and anchon from anchein meaning to choke, referring to the association with a dog and the plant's tendency to overwhelm or choke neighbouring plants used as support.

The specific name, viminale, is derived from the Latin word vimen meaning a pliant twig, referring to the plant's shoots (Germishuizen and Fabian, 1982; Letty, 1962; www.repository.up.ac.za).