Home » TYPES » Climbers » Cynanchum viminale flowers
Back to Category Overview
Total images in all categories: 11,411
Total number of hits on all images: 6,181,756 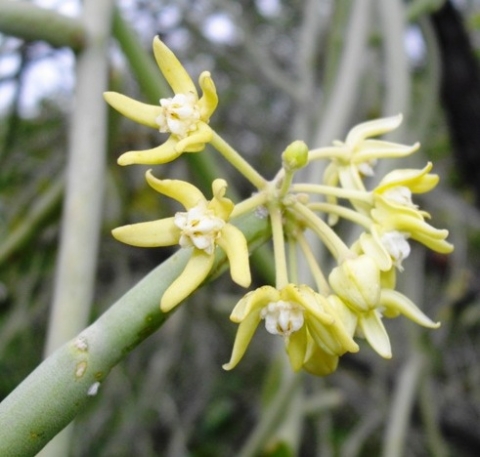 The two unopened buds of Cynanchum viminale in picture give an idea of the floral development sequence. An umbel of caustic creeper flowers such as this may be recognised by people of China, India and many islands of the Indian and Pacific Ocean. Growing in a natural distribution halfway around the earth, people have learnt to be careful about the caustic milky latex of C. viminale that appears when the stem is damaged.

Still, they have also devised a wide variety of medicinal uses for plant parts, including treatment for smallpox, open wounds, skin parasites and stomach disorders. Nursing mothers sometimes use the plant to stimulate milk flow. The stems in some form are also sometimes eaten. Human ingenuity often finds ways of accessing benefit from sources close to danger.

Care should always be taken in using this (and other) plants medicinally or as food. Cursory reports of usage given in passing such as here often omit the detail of measures appropriate for avoiding the risks not generally known. Exact recipes should be obtained.

This is another plant with the intriguing characteristic that it is both browsed by livestock and sometimes toxic to them; often in different geographic regions where soil, climate and other variables may bring about differentiation and contrasting attributes. Angora goats of the Eastern Cape Karoo are notable among animals sometimes suffering poisoning from this plant (Smith, et al, 2017; Vahrmeijer, 1981; Wikipedia).