Home » TYPES » Climbers » Rhoicissus tridentata subsp. cuneifolia
Back to Category Overview
Total images in all categories: 10,185
Total number of hits on all images: 4,845,598 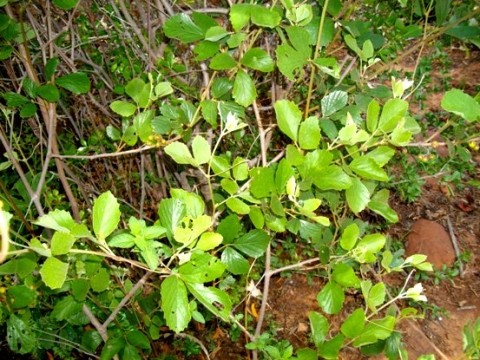 Rhoicissus tridentata is a robust climber or sprawling plant that earned itself the dubious honour of being included on the South African list of recorded trees (No. 456.6). Commonly known as the bushman’s grape, this plant is found throughout the eastern parts of South Africa. It also grows in much of Zimbabwe and more widely in Africa. Branches of the bushman's grape may meander into trees in grassy woodland or evergreen forests to heights of 10 m. Without support, as it also grows on grassy slopes and among rocks, it is a scrambling shrub, very rarely a small tree.

The two subspecies differ insofar as subsp. tridentata is a smaller plant found in the Western Cape and Eastern Cape with nearly entire leaf margins and up to four teeth on the terminal leaflet tip, while subsp. cuneifolia has larger leaves with four or more teeth on the terminal leaflet tip. Subsp. cuneifolia also has two forms, being hairy in the north of the distribution area, hairless in the south. On the Magaliesberg Rhoicissus tridentata subsp. cuneifolia or northern bushman's grape tends to be hairy.

R. tridentata is not considered to be threatened in its habitat early in the twenty first century. The subspecies have not been evaluated.

For most of the year the fruits hang in tiny grape-like bunches from the stems. Some green fruits can be seen in the photo taken on the Magaliesberg in December. They are sought after by children, birds and animals when ripe (Coates Palgrave, 2002; Schmidt, et al, 2002; http://redlist.sanbi.org).