Home » TYPES » Climbers » Rhipsalis baccifera, the mistletoe cactus
Back to Category Overview
Total images in all categories: 9,913
Total number of hits on all images: 4,613,576 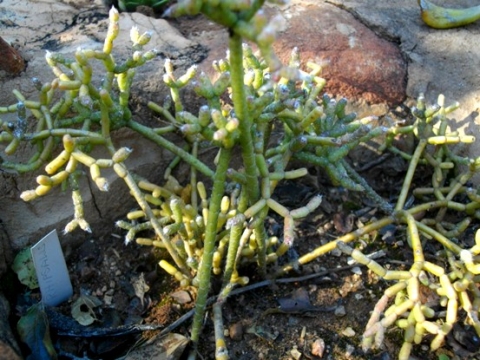 Rhipsalis baccifera, commonly known as the mistletoe cactus or spaghetti cactus, is the only cactus plant growing naturally outside of the two American continents. Although naturalised here and not originally growing in Africa, it becomes a common talking point when South African aloes and other succulents are erroneously called cacti as still happens. The plant may have arrived here by ship after Columbus, or brought by migratory birds.

The latter theory brings a modicum of respectability to the claim that this is Africa’s only cactus and it is then also somewhat formally listed as a Southern African succulent. Claims should not be staked too vociferously, because it grew earlier (and still does) in Central America, South America, the Caribbean, Florida and even in Sri Lanka. This confers Marco Polo type status to mistletoe cactus. As can be expected, such a ubiquitous traveller uses many aliases: 29 botanical synonyms are listed just in Wikipedia for the plant; some other lists exceed that.

The appearance of the spaghetti cactus also varies much. R. baccifera is epiphytic and can be put in a tree to scramble although nursery specimens in South Africa are found planted in an organic mix in containers. It grows many branching soft yellow-green stems and may scramble to more than 3 m. Small greenish white cactus type flowers are followed by edible spherical fruits, small and white or pinkish.

The fruits are favoured by many birds who start the trouble as the plant does have invasive potential, although more so in regions of its American habitat (Wikipedia; Smith, et al, 1997; www.cactiguide.com; www.davesgarden.com).