Home » TYPES » Climbers » Momordica balsamina
Back to Category Overview
Total images in all categories: 9,416
Total number of hits on all images: 4,232,545 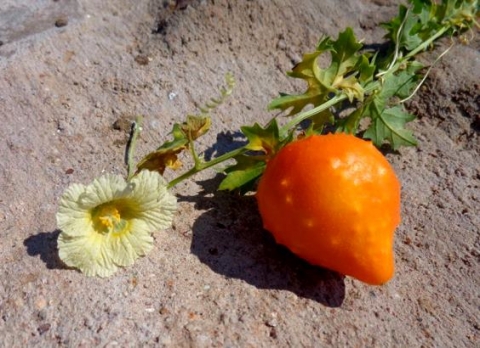 Momordica balsamina is a perennial climber growing slender, twining stems from a tuberous rootstock. It is a member of the Cucurbitaceae or cucumber family. The tendrils on the stems are not forked.

The five- to seven-lobed leaves are stalked. The irregular, deeply incised lobes sometimes have toothed margins. The leaves exude an unpleasant odour when bruised. Still, they are cooked as a spinach, sometimes with the green fruits added to the dish.

The flowers are unisexual but both sexes appear on the same plant during spring and summer, sometimes later. The male flowers grow in racemes, the female ones solitary.

The shallow, central bowl of the flower is a darker yellow, while the spreading, round-tipped to slightly pointy lobes overlap slightly. They are paler, cream to ivory and wrinkled. There may be dark markings in the corolla bowl, not seen in the flower in picture.

The nearly globose, slightly ellipsoid fruit has a narrowly attenuating tip. Its shiny orange surface when ripe has a sparsely scattered covering of small, pointy protrusions. The fruit becomes 4 cm long, bursting open before or when picked ripe. The small seeds have fleshy, sweet-tasting coverings.

The species distribution is widespread in the east of the country from the Eastern Cape to Limpopo as well as in the east of the Northern Cape and in North West. It is also common in some neighbouring countries like Namibia and Botswana. This one was found in the Limpopo Valley.

The habitat is sandy flats in arid summer rainfall areas and rocky woodland, often in disturbed places. The plant is not considered to be threatened in its habitat early in the twenty first century.

Nine of the about 40 Momordica species of Africa and Asia are indigenous in South Africa (Manning, 2009; Van Wyk and Malan, 1997; Onderstall, 1996; iNaturalist; http://redlist.sanbi.org).